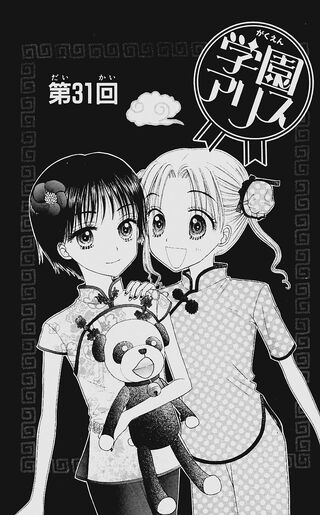 After hearing about the intruders, Natsume leaves along with Mikan, Hotaru, Ruka, linchou. To see the people who stole Iinchou's alice, Mikan and Hotaru disobeyed the orders to stay inside leaving Natsume, Ruka, and linchou behind. Mikan asks Hotaru if it was alright to disobey the orders, but she replies that the school caught the intruders and that the warning was so people would not panic, though she mentally thinks about how the school reacted to Mikan. Narumi, Misaki, and Noda are talking about how the middle students are eager to know about what is going on, when an announcement comes that two alices, one possibly being a woman are on the grounds near the ambulance and may be companions of Z. Meanwhile, Hotaru is planning to attach an eavesdropping mosquito on the intruders, which amazed Mikan about how hard she worked. Hotaru is doing this, because of the importance of Iinchou to their class as he keeps everyone in order and happy. As Mikan replies about getting linchou's alice back they heard an explosion. At the teachers location, Serina has found Mikan and Hotaru via crystal ball near the explosion. Hotaru hears the news about the intruders escaping from her panda headphones. Narumi looks at the camera's and is shocked for some reason. Knowing the danger, Hotaru proposes that they leave now, but before they do they are found by the intruders. They ignored them and left, though when Mikan appears one of them attempts to steal her alice. Security comes and one of the Z members shoots a bullet at them, but Mikan is in the way of the bullet's path. Hotaru quickly responds and pushes Mikan out of the bullet's path, but is shot herself.

Retrieved from "https://gakuenalice.fandom.com/wiki/Gakuen_Alice_Chapter_031?oldid=16778"
Community content is available under CC-BY-SA unless otherwise noted.