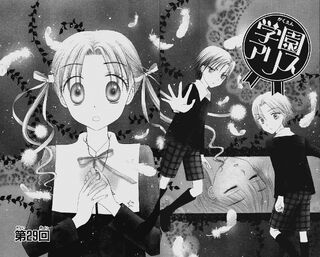 Title- There Has Been A Loss

Narumi is seen at Mikan's home giving Mikan's letter to her grandfather who is crying while reading it. Elsewhere,  Mikan and her friends are cleaning up the autumn leaves. The winner of the Best Student Award is Iinchou who is going home to visit his family for a week and the little sister he has only seen in photos. A week later Narumi tells the students about incidents of loss of Alice; Alices loses their alice for no apparent reason, but the incidents occur in adults. To learn more, Hotaru puts her Panda Ear Sticker on Narumi. Misaki and Narumi discuss about the incidents stated in Middle School. Misaki says to Narumi that he knows what Narumi is thinking about and he should not do unnecessary actions to worsen Mikan's position, so he should forget it. Some people in Class B talk about the benefits of losing their alice if they could go home. Sumire is disgusted by this attitude, but Nonoko thinks that even if she could go home, her alice is a part of her, and she would miss her friends. Natsume leaves the classroom and Ruka goes after him. Ruka questions if something is wrong him, but Natsume smiles and tells him nothing is wrong. At the Special Ability classroom Mikan thinks about why Natsume is avoiding her, where she meets Tono who cheers her up. Tsubasa, Misaki, and Megane walk in the scene and Tsubasa tells Mikan to stay away from Tono or she'll get pregnant. Tono turns out to be the Special Ability representative and has the Amplification Alice. Tono asks if Natsume is alright, because he has recently been in the hospital, which Mikan didn't know. Tono also speaks about his outside mission being canceled, because of the incidents. Noda comes by and says he does think the school is safe, but the cause of the incidents were human reasons. Meanwhile, Iinchou's car almost runs over a women and he goes to help her. Afterwards he feels that the person reminds him of someone.

Retrieved from "https://gakuenalice.fandom.com/wiki/Gakuen_Alice_Chapter_029?oldid=16776"
Community content is available under CC-BY-SA unless otherwise noted.