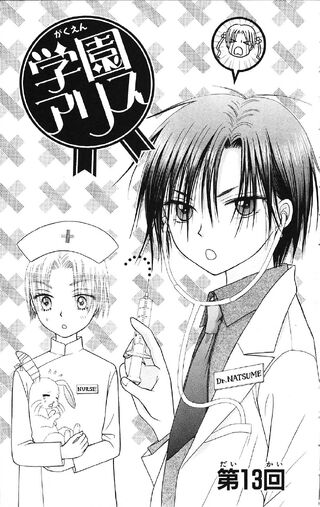 Class B reveals that there is a rumor a celebrity graduate of Gakuen Alice named Reo Mouri is going to perform at the Alice Festival. This causes excitement to many of the students and Mikan, who didn't know who he was at first. While everyone else is excited, Ruka is sad about Natsume, who is recently in the hospital because of "overwork". Mikan is concerned because she didn't know Natsume was hospitalized and thinks about going to see him. But Sumire then says she and Ruka are leaving to visit Natsume in the hospital because they are Natsume's "special friends", leaving Mikan and the others confused. After this, Reo arrives at the academy gate and comments on how long its been since he's been at the academy. When he hears that natsume is in the hospital, he fakes a reason to visit it and sees Natsume in his room. Using Hotaru's inventions, Mikan and her friends devise a plan to meet Reo at the hospital. Meanwhile Reo who is at the hospital mentions Narumi, meaning that two have some sort of connection. With their friends being captured one by one by the guards, only Mikan and Hotaru make to the hospital. They split up and disguise themselves in hospital gowns to fool the doctors and nurses. Remembering Natsume being ill, she decides to check up on how Natsume is doing because it would make her feel better. She is found by Sumire, who actually used Natsume as an excuse to see Reo. When they get to Natsume's room, they look in the mirror and the two witness Reo drugging Natsume and kidnaps him. The girls desperately try to tell a teacher about the kidnapping, but is not believed. With no other choice, they dash out the school gate and run after Reo's car, escaping from the academy to save Natsume.

Retrieved from "https://gakuenalice.fandom.com/wiki/Gakuen_Alice_Chapter_013?oldid=16760"
Community content is available under CC-BY-SA unless otherwise noted.