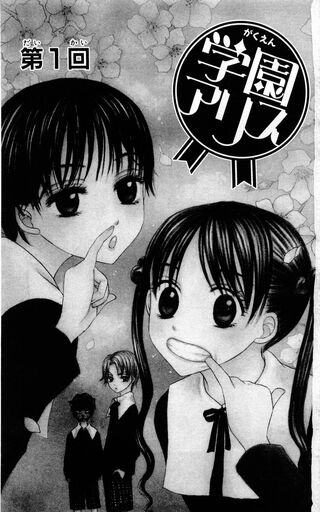 Mikan Sakura is a 10-year-old orphan who lives in a small village with her grandfather. The chapter starts off with Mikan hurrying to meet with her best friend, Hotaru Imai, who has been accepted to a school called Gakuen Alice in Tokyo. Mikan is mad because she was the last person to learn this, but Hotaru, after hitting Mikan with her invention and calling her a dummy for crying, tells Mikan to never cry and smile. Hotaru promises to stay in touch with Mikan, who bids her farewell. In a flashback, Hotaru enrolled in Mikan's school one year ago after moving around so much. At first, Mikan did not like Hotaru because she was so serious and greedy, but when Hotaru asked Mikan to join in a singing and dancing contest, which they won, they became best friends. Since then, Mikan has been devoted to Hotaru and follows her around, despite their frequent bickering. The scene shifts back to thd present, in which six months have passed and Mikan has yet to receive a letter from Hotaru other than a simple postcard and a seemingly callous message. While in school, Mikan learns from her classmates that Gakuen Alice is a school for people with special abilities called Alices. She discovers from Hotaru’s mother the two reasons for Hotaru's decision to enroll in the academy; the first reason was so that their school would not close down and the second reason was so that Mikan would not be sad about her leaving. Mikan cries and says how hard it is to understand Hotaru.

That night, Mikan makes the decision to leave the village and go after Hotaru because she is worried about the rumors about he academy treating the students as slaves, which she thinks is a possibility due to having no contact with Hotaru. After several days of traveling, she arrives in Tokyo and makes it to the main entrance to the school but she is nearly tricked into being kidnapped by strangers. A teacher from the school named Narumi, who is standing by the gate, saves her. Mikan tells him that she wishes to enroll in the school, but confesses that she is not sure if she has an Alice, which she thinks is simply a gifted talent. Narumi explains that Alices are natural born powers. He then tells her that he enroll her because he suspects she also has an Alice. As he tries to tell Mikan what he thinks her Alice could be, a boy with a black cat mask creates a fire that blasts the gate and them away. Narumi tells Mikan that the boy is Natsume Hyūga, who is a powerful elementary school student with the Alice of Fire. Mikan is stunned by the boy's appearance. As Natsume jumps, Narumi easily defeats Natsume with a bean string. Mikan runs to aid Natsume, who appears to try to attack her before Narumi uses his Alice to knock Natsume out. Narumi has the gate open to the school and the three arrive into the academy.

Retrieved from "https://gakuenalice.fandom.com/wiki/Gakuen_Alice_Chapter_001?oldid=18241"
Community content is available under CC-BY-SA unless otherwise noted.